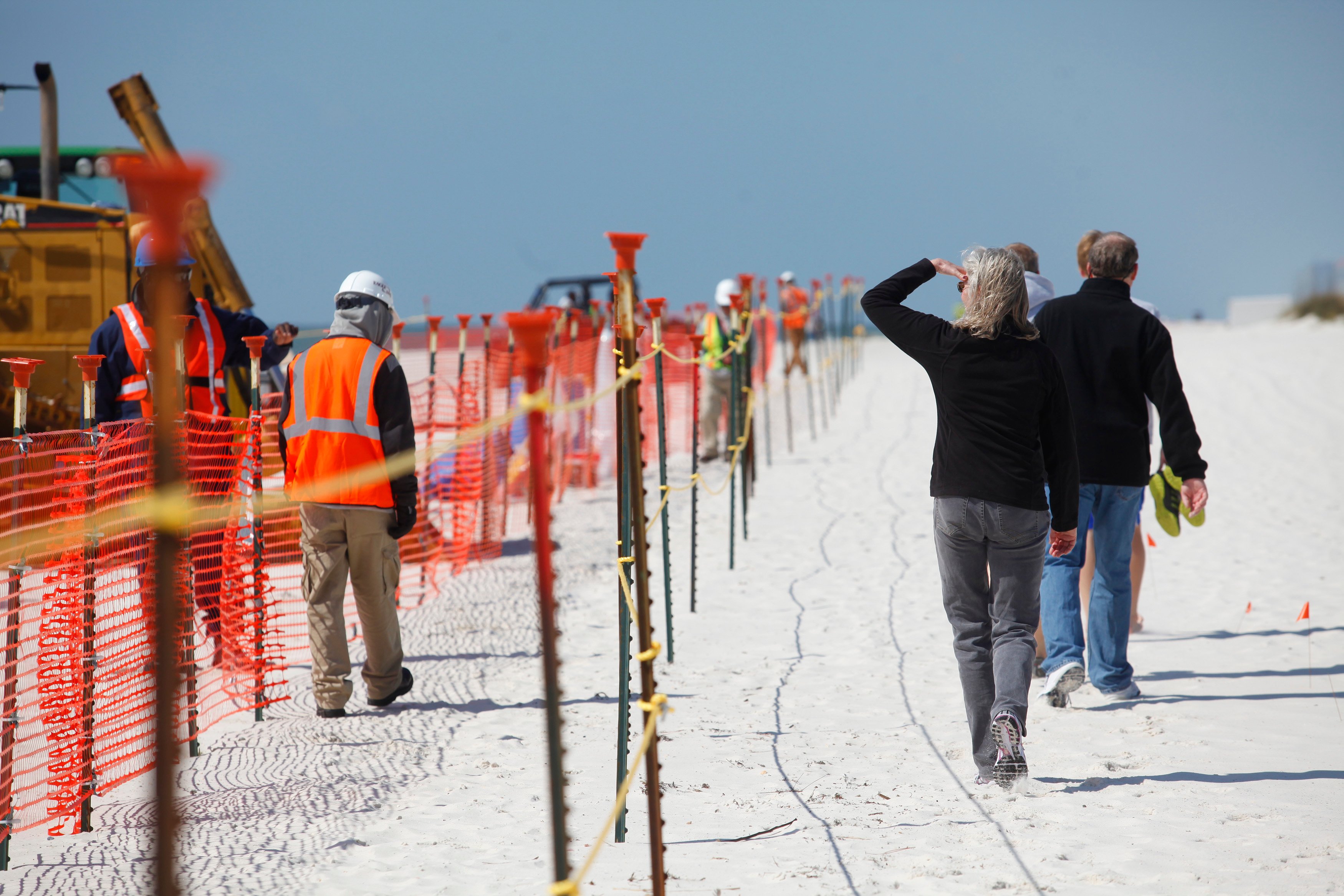 For several years, locals have agreed on a plan to restore the beaches and dunes of Perdido Key, a gaunt barrier island on the Gulf Coast that’s home to the endangered beach mouse, nesting sea turtles and a colony of high-rise condos packed with retirees and vacationers. The island also serves as a buffer against storm surges that batter the nearby mainland city of Pensacola.

But Perdido Key’s own protective beaches are being washed away, year by year, storm by storm, to the point where the state has designated a three-mile stretch as critically eroded and other stretches as eroded, but not yet critically. The continuing beach erosion poses a threat to both creatures and condo dwellers.

Despite a consensus about how best to replace the sugar-white sand, little action has occurred. Why? Well, for familiar reasons: red tape, political inertia and a lack of money.

Now time is slipping away for Perdido Key, which is 16 miles long and a few hundred yards wide in many places. In September, Hurricane Sally snapped pine trees and telephone poles and gouged three channels through the key’s eastern section, carving it into smaller islands.

It was a reminder of the fleeting balance between land and sea and the increasing vulnerability of Sun Belt coastlines.

Those who have a say about how, when or if Perdido Key’s beaches get restored include the Navy, Coast Guard, U.S. Army Corps of Engineers, National Park Service, Florida Department of Environmental Quality and surrounding Escambia County. And then there’s the waterfront property owners themselves. The key’s real estate portfolio consists of retirement and weekend homes for the wealthy as well as rental properties for vacationers. It includes 20-story condominiums that soar more than 200-feet and the Flora-Bama beachfront bar, which straddles the Florida-Alabama state line and has five stages for live music and about as many bars.

Historically, Perdido Key’s beaches were renourished by the natural drift of sand from east to west along that northern Gulf Coast. That migration was disrupted by dredging of an inlet east of the island. That inlet, known as the Pensacola Pass, was dredged to give large Navy and commercial ships access to the Pensacola Bay from the Gulf of Mexico.

Since then, sand moving east along the coast has been sucked into the inlet rather than continuing its westward migration to Perdido Key. That has left Perdido Key starved for sand while requiring recurrent dredging of the channel to maintain its navigable depth.

Meanwhile, the beaches and dunes of Perdido Key have been whittled away by a succession of storms and hurricanes over the past three decades, including Ivan in 2004 and Sally in September.

Ordinarily, beach replenishment isn’t a problem, it’s a line item in a budget. The cost is usually split among the federal, state and local governments.

But there’s a catch on Perdido Key. There, beachfront property owners possess the land up to the mean-high-tide line. They essentially own the beach behind their property, which affords them privacy most seafront homeowners don’t enjoy.

The state could bring in sand to widen the beach, but that new beach would belong to the state of Florida, making it public property. Perdido Key property owners would lose their exclusive access to the beaches behind their houses and condos.

For that reason, they nixed the idea and opted instead for a beach preservation plan focused on sowing sea oats and other native vegetation into the dunes. They also came up with a plan to have the sand dredged from the channel dumped near the eastern tip of the key, hoping it would replenish the beaches.

But real life is more daunting than the drawing board. As it turns out, choreographing the efforts of all the relevant federal, state and local agencies – as well as the private property owners themselves – has proven difficult.

So, sea oats are being sown into the dunes, but no dredged sand is being dumped near the island. The campaign to replenish the beaches appears to have stalled even as the island gets carved up by hurricanes.

Perdido Key’s sand is disappearing through an hourglass. 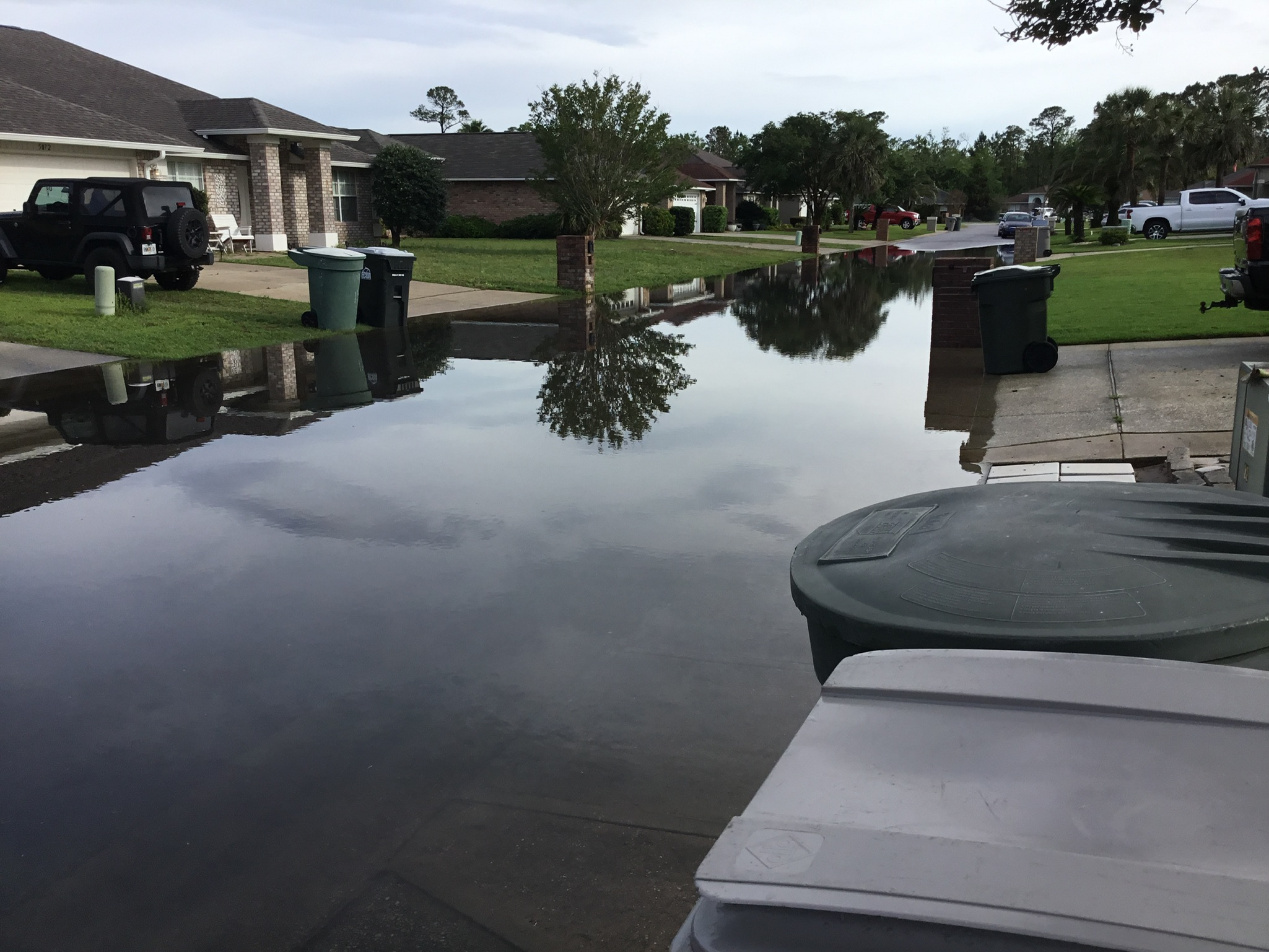 08/11/2021 Inch of Rain Causes Flooding at Site of Flood Defenders’ Campaign A single inch of rain flooded the Perdido Estates neighborhood in Escambia County, Florida — an area at the heart of an ongoing Flood Defenders…
Read Post