America's most frequent and expensive disaster

Flooding has cost US taxpayers more than $850 billion since 2000 and is responsible for ⅔ of the cost from all natural disasters. In small towns and large cities, floods have inundated homes, cut-off communities, and left the scars of financial and emotional distress across the whole country.

America has experienced an urban flooding event once every 2-3 days for the past 25 years.2

The United States faces a massive gap in insurance3 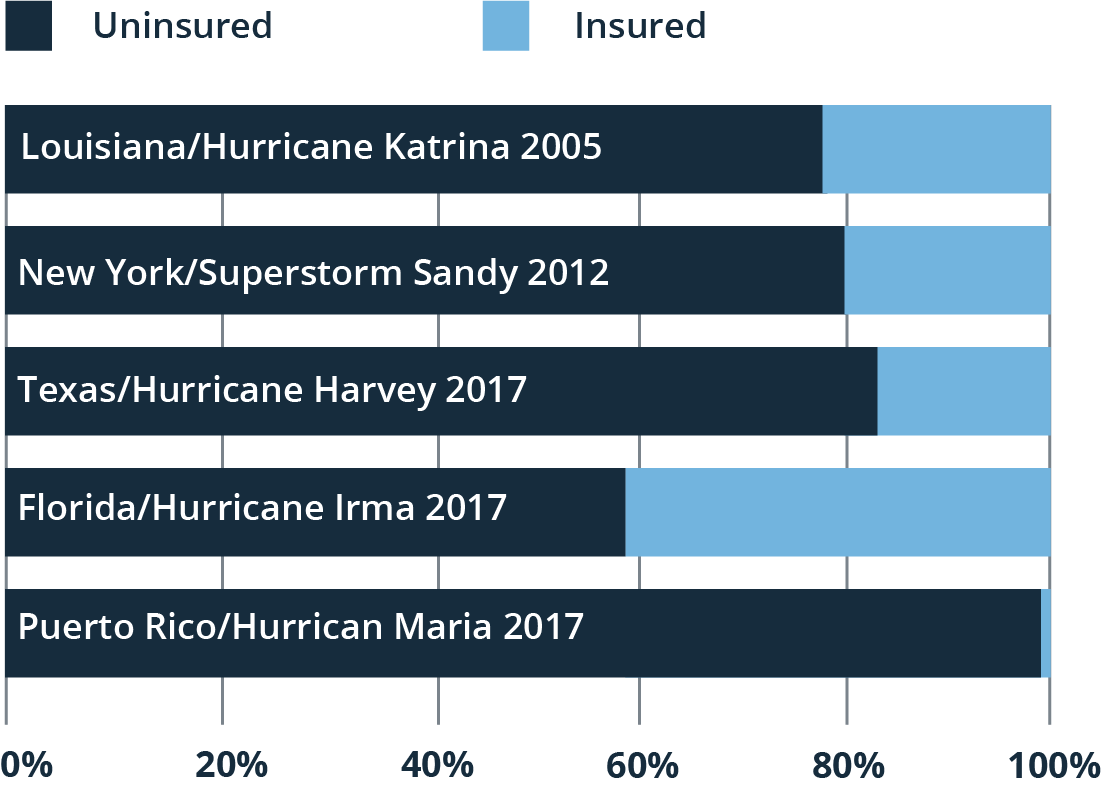 The vast majority of flood victims are uninsured. For example, an estimated 76% of overall damage from Hurricanes Irma and Harvey in 2017 was uninsured.5

When it strikes, it wreaks havoc on our lives - sometimes without warning, given our flood maps are frequently incorrect or incomplete. All too often it is left to individuals and communities to pick up the pieces after the devastation.

For a majority of Americans, ⅔ of their wealth is in their home. One flood can wipe out a lifetime of savings.4

It is a common misconception that insurance awards and aid from government agencies will allow communities and businesses to pick up the pieces after a flood.

The scale is immense

Many people think that this problem only occurs near the coast or next to rivers. However, it is happening all across the US, all the time.

99% of US counties are impacted by Flooding8

Number of properties at substantial flood risk* by county in 20207 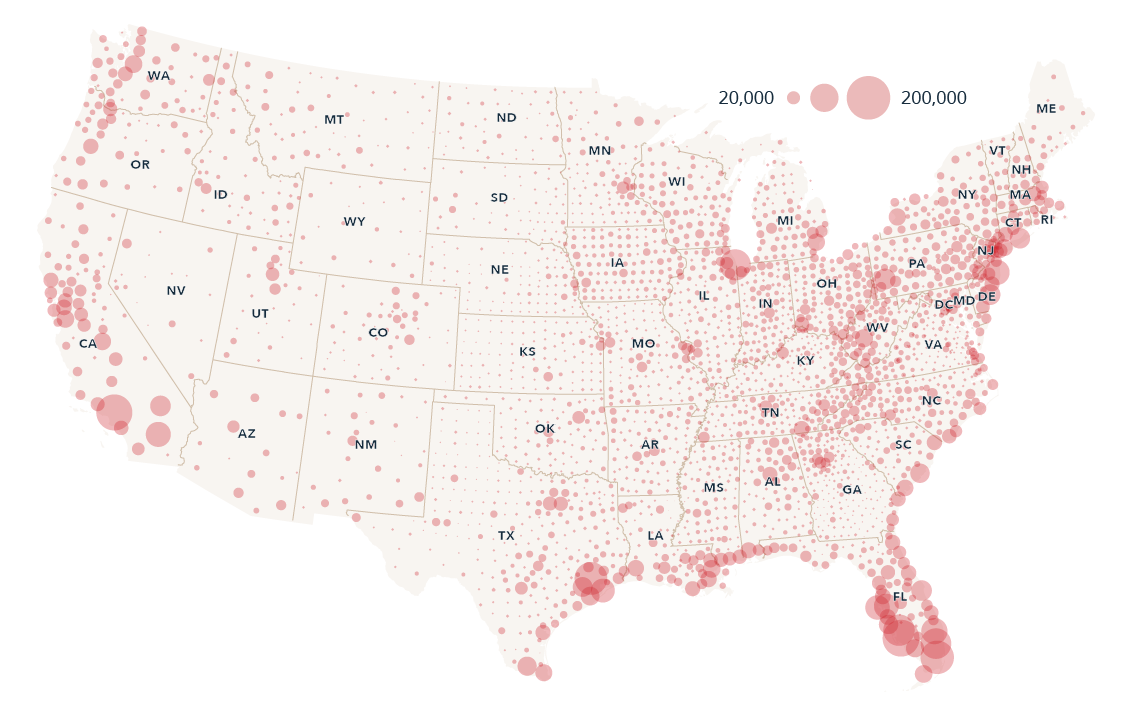 It’s bad — and getting worse

Flooding events (like flash, surge, and storm) are becoming more severe, more intense, and more damaging. We know that rainstorms are getting more intense. For the Eastern United States, that has resulted in up to 70% more heavy downpours each year.10

Since 1950, the ocean has risen 6.5 inches nationally. This may not sound like much, but it only takes inches to stop gravity-fed drainage systems from working or for water to creep into our streets.

Many coastal areas are seeing floods more often even when there are no storms, as local sea levels increase the number of “sunny day floods” caused by high tides.

The sea’s surface temperature is 1.5˚F warmer than it was in 1950.13 Higher ocean surface temperatures fuel hurricanes and offshore storms with more water and power, so these systems can reach further inland and further north, be more intense, and last longer.14 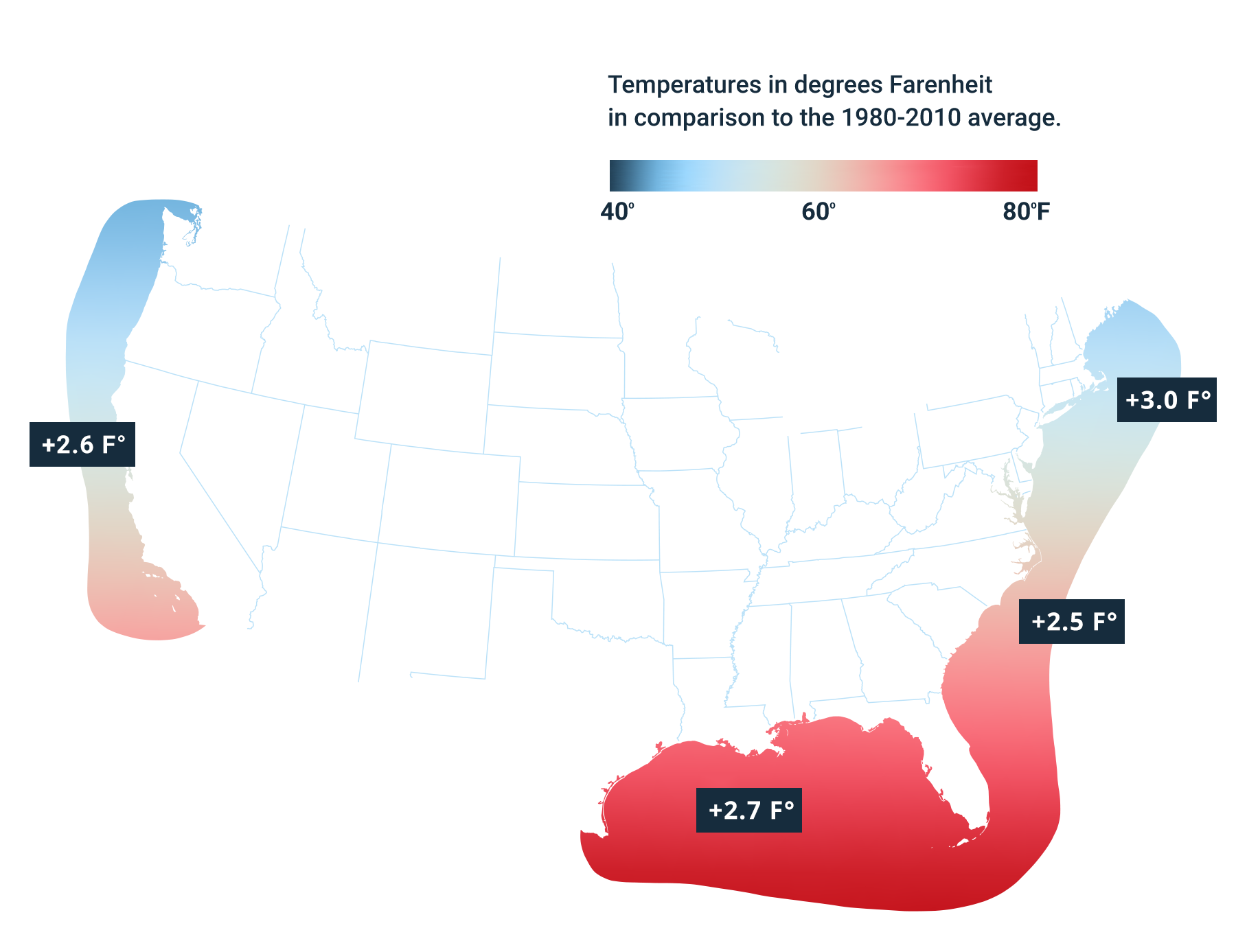 All that water, no place left to go

Impervious surfaces act as flood highways, increasing the frequency, and severity of flooding15

When you pave over a natural surface, the water has to go somewhere else. Extensive development has dramatically decreased natural drainage, creating excess runoff, increasing flood risk for millions of Americans. Some cities have retention standards or impact fees that provide for more pipe capacity so that neighbors aren’t put in harm’s way with excess runoff.16 However, most cities don’t.

3” rain = how much runoff on different surfaces?

Here you can see the massive increase in paved areas in Houston over 20 years.

You’d think it would be common sense for new development not to increase the flooding risk for existing communities, right? Well, it’s not. New homes are being built in places that already flood and impervious surfaces continue to expand without offset requirements, helping to create a network of flood highways that direct water right where we don’t want it18 — into your home.

Amazingly, populations in floodplains across the US are growing faster than populations outside of them — the Miami-Fort Lauderdale-West Palm Beach, Fla. metropolitan area added 181,000 people to its floodplain from 2000 to 2016.19

Our maps are misleading, outdated, or just plain missing

Our national flood standards… are we building on shaky foundations?

We’ve been designing to a “100-year flood” standard since 1973.20 However, when we routinely see 50% of houses flooding outside the 100-year floodplain, you have to wonder: Did we pick the right standard?21 For example, in Holland, where more than 60% of the population lives below sea level, they design everything to a 10,000-year standard for populated areas - no flood insurance required anywhere.22

The term “100-year flood” was coined in 1973, in a meeting of real estate lobbies and the Army Corps of Engineers (USACE).23 The goal was to design a federal floodplain standard to determine which properties would need to meet flood control regulations, and there was disagreement - the real estate industry wanted a narrower, 50-year standard, and USACE wanted a 500-year standard.

A compromise was reached in what we now call the 100-year standard: the risk a once-per-100-year flood will occur in any given year (1%). But it can be a deceiving metric; the odds of a 100-year flood occurring during a typical 30-year mortgage is 26%!

Flood standards in many developed countries far exceed the NFIP 1 in 100 standard. For example, Japan and the Netherlands use 1 in 10,000-year protection for coastal works and densely populated areas.24

The story gets worse. FEMA flood maps are supposedly the "gold standard" for America’s understanding of flood risk exposure. Yet FEMA flood maps are fundamentally wrong – 75% are out of date, 40% of the country has never been mapped. Recently a group of scientists and the First Street Foundation came together to build a better flood model. They identify 6 million Americans who are at substantial risk but were not included in FEMA flood zones26 – they aren’t even aware of the danger to their property.

This dangerous gap has been made clear with hurricanes that have flooded homes “outside” of the 100-year floodplain.

Not providing this information to homeowners has consequences: If you don’t know you’re at risk, you don’t take the necessary precautions, like buying flood insurance.27 Take, for example, Hurricane Irma in 2017: of the 3.3 million households in the most affected counties, only 14% had flood insurance.

Political interests can compromise the accuracy of FEMA maps28

The maps are outdated and some areas aren’t mapped, but it gets worse. Some maps are just plain wrong - for political reasons. Here you can follow a political process where elected officials changed the maps to keep insurance rates low and home values high. This works until the next storm - which is bound to happen.

...and it definitely isn’t ready for tomorrow29

Across the US, people are relying on critical stormwater infrastructure built almost 100 years ago that is now nearing the end of its life. In lots of places, we’re throwing good money after bad - paying more for maintenance than renewal. Our communities are working with pipes and drainage systems designed for the needs of a different time - one in which they were supporting drastically smaller populations, and different weather!

America received a D on its Infrastructure Report Card

In 2021, the American Society of Civil Engineers gave the United States a D on its Infrastructure Report Card. Everywhere you look you see huge problems.30 For example, our dams and levees are old. The average age of an American levee is 57 years with a lifespan of 50-80 years.31 Not good enough considering the more than $1.3 trillion in US property they protect from flooding.32 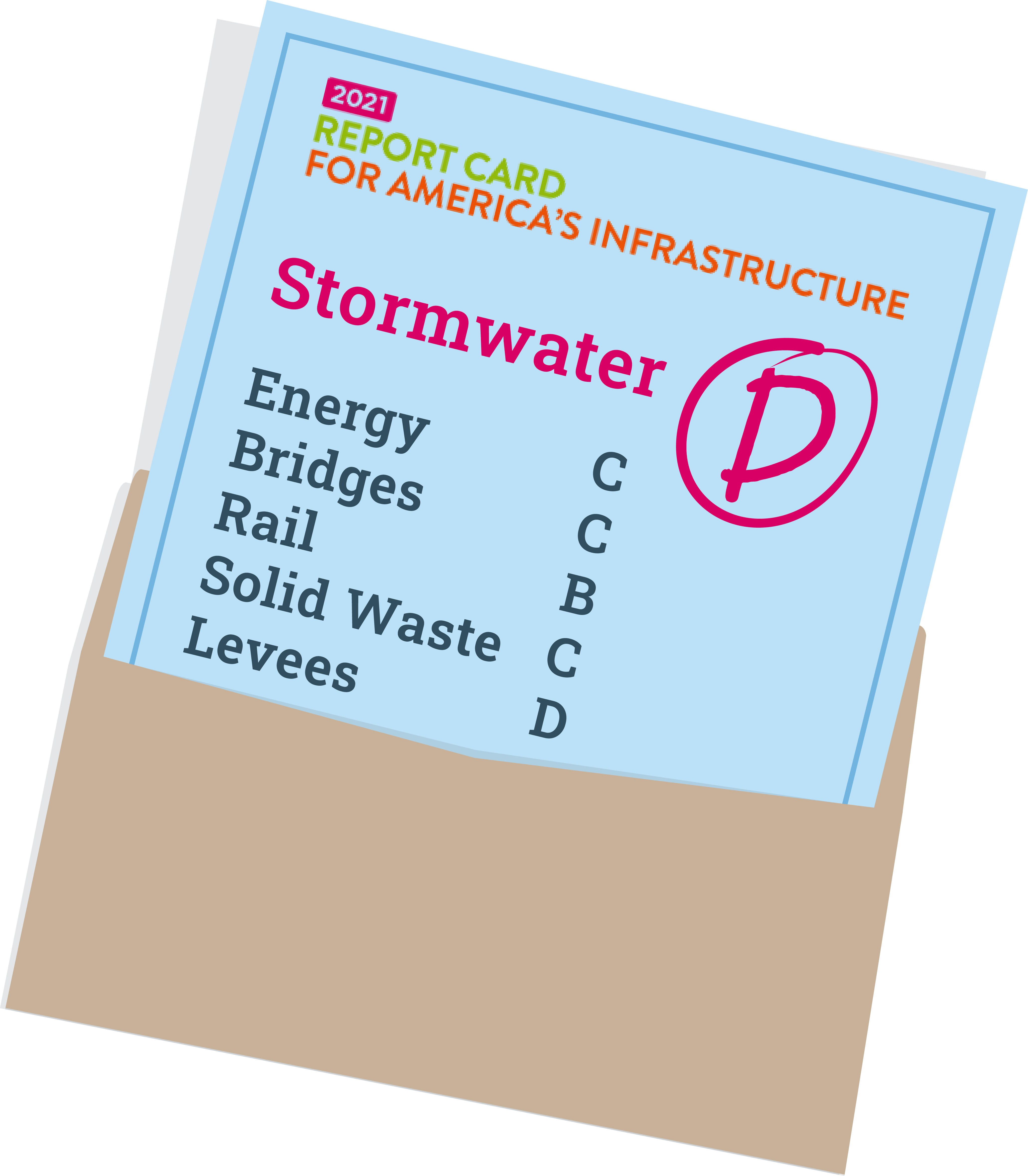 Our water infrastructure is 80 years old on average with an expected lifetime of 75-100 years.

Communities are strapped for cash and fighting an uphill battle - they can’t do it alone. Recent studies have estimated a price tag as high as $400 billion over the next 20 years to protect communities from coastal flooding alone.33 That’s almost as much as it costs to build the entire interstate highway system! 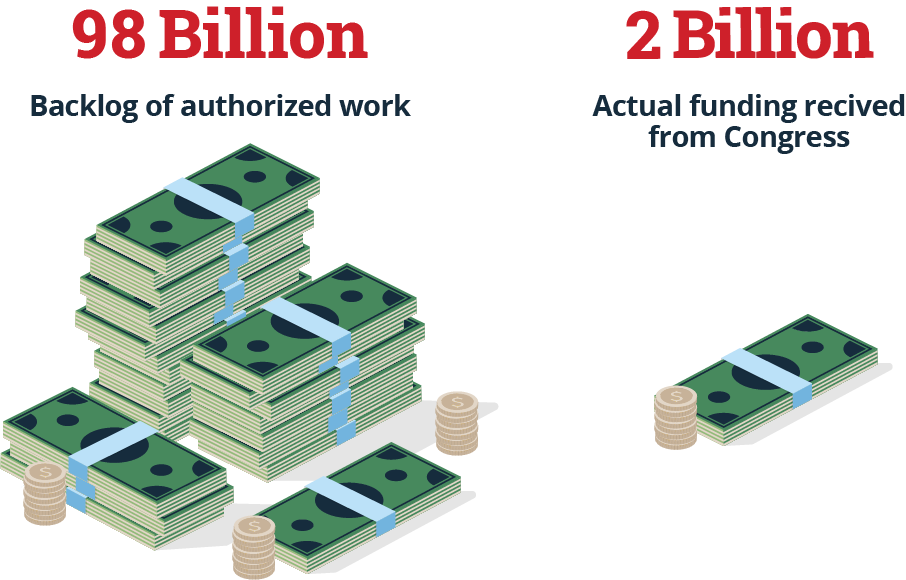 Communities are fighting for a share of the limited federal assistance available, and some are at a disadvantage. And to complicate matters even further, the federal government itself is often stretched for capacity both in funding and personnel.

As of last year, the USACE was facing a $98 billion backlog of authorized work.34 But it only receives about $2 billion per year in construction funding from Congress35 - that works out to a backlog of almost five decades worth of work. How is the Army Corps supposed to help protect our communities from flooding if they’re that underwater?

The plans and investment to improve infrastructure and resilience won’t happen overnight, but we will all benefit from proactive thinking and support for better solutions. Our communities depend upon it.

As Americans, time and time again we’ve chosen to lean into the hard challenges - let’s not turn away from this one.

We are Flood Defenders

A non-profit, non-partisan organization giving a powerful voice to those affected by flooding.